There is no lower age limit. You are never too young, or too old, to start growing old disgracefully!

Your local group may hold workshops, do various
creative activities, have discussions or just relax and
enjoy each other’s company.

If you are an older woman who wants to make friends, have fun and grow, our network might be just what you’re looking for. With us you will find new ideas, and a different approach to life.

...as one of our members says:

“There is something about the atmosphere that’s created at a g.o.d ‘do’ that I’ve never found anywhere else. It’s just a pity that it’s so difficult to explain to other people exactly what we’re about – it’s something that has to be experienced.” 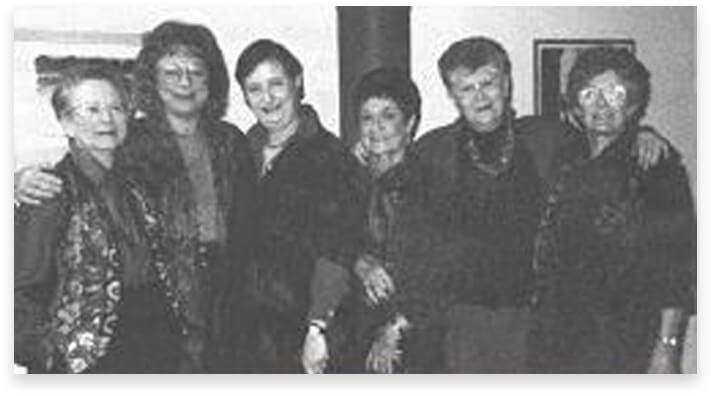 Growing Old Disgracefully began in 1988 as a course for older women at The Hen House, a women’s holiday and study centre. From one course in the first year it rapidly grew to six in 1991.

“Growing Old Disgracefully” was published in 1993, and generated a great deal of interest from women all over the UK and beyond. A few years later the same six women wrote a second book called “Disgracefully Yours”. The first book is still available and can be purchased second hand from Amazon. You might find copies in your library too.

The enthusiasm of women who identified with the ideas expressed in the books, as well as media interest, resulted in the creation of a network of women across the UK. This network spread to Australia, New Zealand, Canada, France, Jersey, the Netherlands, Spain and Switzerland.

Since then, hundreds of women have benefited from membership of the growing old disgracefully network. They have found not only great events and activities, but friendship, support, and a lot of laughter!

We use cookies on our website to give you the most relevant experience by remembering your preferences and repeat visits. By clicking “Accept All”, you consent to the use of ALL the cookies. However, you may visit "Cookie Settings" to provide a controlled consent.
Cookie SettingsAccept All
Manage consent

This website uses cookies to improve your experience while you navigate through the website. Out of these, the cookies that are categorized as necessary are stored on your browser as they are essential for the working of basic functionalities of the website. We also use third-party cookies that help us analyze and understand how you use this website. These cookies will be stored in your browser only with your consent. You also have the option to opt-out of these cookies. But opting out of some of these cookies may affect your browsing experience.
Necessary Always Enabled
Necessary cookies are absolutely essential for the website to function properly. These cookies ensure basic functionalities and security features of the website, anonymously.
Functional
Functional cookies help to perform certain functionalities like sharing the content of the website on social media platforms, collect feedbacks, and other third-party features.
Performance
Performance cookies are used to understand and analyze the key performance indexes of the website which helps in delivering a better user experience for the visitors.
Analytics
Analytical cookies are used to understand how visitors interact with the website. These cookies help provide information on metrics the number of visitors, bounce rate, traffic source, etc.
Advertisement
Advertisement cookies are used to provide visitors with relevant ads and marketing campaigns. These cookies track visitors across websites and collect information to provide customized ads.
Others
Other uncategorized cookies are those that are being analyzed and have not been classified into a category as yet.
SAVE & ACCEPT